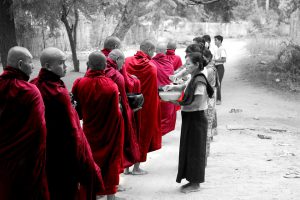 370. Cut off the five senses, leave the five, rise above the five. A bhikkhu, who has escaped from the five fetters, he is called ‘One Who is Saved from the Flood.’
371. Meditate, O bhikkhu, and be not heedless! Do not direct thy thought to what gives pleasure that thou mayest not for thy heedlessness have to swallow the iron ball in hell, and that thou mayest not cry out when burning, ‘I am in pain.’
372. Without knowledge there is no meditation, without meditation there is no knowledge: he who has knowledge and meditation is near unto perfection.
373. A bhikkhu who has entered his empty house, and whose mind is tranquil, feels a more than human delight when he sees the True Law clearly.
374. As soon as he has considered the origin and destruction of the elements of the physical body, he finds happiness and joy which belong to those who know the path to perfection.
375. And this is the beginning here for a wise bhikkhu: watchfulness over the senses, contentedness, observant of the True Law; keep noble friends whose life is pure, and who are not slothful.
376. Let him live in charity, let him be perfect in his duties; then in the fullness of delight he will make an end of suffering.
377. As the Vassika plant sheds its withered flowers, men should shed passion and hatred, O ye bhikkhus!
378. The bhikkhu whose body and tongue and mind are quieted, who is collected, and has rejected the baits of the world, he is called quiet.
379. Rouse thyself by thyself, examine thyself by thyself, thus self-protected and attentive wilt thou live happily, O bhikkhu!
380. For self is the lord of self, self is the refuge of self; therefore curb thyself as the merchant curbs a good horse.
381. The bhikkhu, full of delight, who is calm in the doctrine of Buddha will reach the quiet place (Nirvana), cessation of natural desires, and happiness.
382. He who, even as a young bhikkhu, applies himself to the doctrine of Buddha, brightens up this world, like the moon when free from clouds.