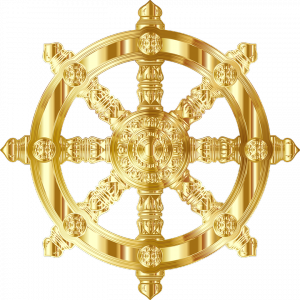 8 He who lives without looking for pleasures, his senses well controlled, moderate in his food, faithful and strong, him Mara will certainly not overthrow, any more than the wind throws down a rocky mountain.
9 He who wishes to put on the yellow dress without having cleansed himself from sin, who disregards temperance and truth, is unworthy of the yellow robe.
10 But he who has cleansed himself from sin, is well grounded in all virtues, and regards also temperance and truth, he is indeed worthy of the yellow robe.
11 They who imagine truth in untruth, and see untruth in truth, never arrive at truth, but follow vain desires.
12 They who know truth in truth, and untruth in untruth, arrive at truth, and follow true desires.
13 As rain breaks through an ill-thatched house, passion will break through an unreflecting mind.
14 As rain does not break through a well-thatched house, passion will not break through a well-reflecting mind.
15 The evil-doer mourns in this world, and he mourns in the next; he mourns in both. He mourns and suffers when he sees the evil of his own work.
16 The virtuous man delights in this world, and he delights in the next; he delights in both. He delights and rejoices, when he sees the purity of his own work.
17 The evil-doer suffers in this world, and he suffers in the next; he suffers in both. He suffers when he thinks of the evil he has done; he suffers more when going on the evil path.
18 The virtuous man is happy in this world, and he is happy in the next; he is happy in both. He is happy when he thinks of the good he has done; he is still more happy when going on the good path.
19 The thoughtless man, even if he can recite a large portion of the True Law (Dharma, Dhamma, Right Doctrine), but is not a doer of it, has no share in the priesthood, but is like a cowherd counting the cows of others.
20 The follower of the Law, even if he can recite only a small portion of the Law, but, having forsaken passion and hatred and foolishness, possesses true knowledge and serenity of mind, he, caring for nothing in this world or that to come, has indeed a share in the priesthood.